Pink is the new green

The enduro pump suckfest is finally over. Yesterday as the temps were dropping I was able to climb Pink Lightening into Chandlar Dub Allstar to create Pink Lightening Ultra. I fell once from the last move of the 30 something foot roof travers linkup but was able to rest long enough to send before dark. What will I do with this new found endurance. Probably nothing. Hueco is in less than a month and its time to crimp.
Posted by sd at 6:15 AM No comments:

Another Monkey off my back

After evacuating work today because the forest service started a control burn to close my work I headed over to Gloria to meet up with Ana. The wind that spread the fire also lowered the temps enough to be able to finally send Jason Ploss's Big, Buff and Tough. This one felt so hard at the end of last season but today I was able to dig deep into the crux left hand hold and make it to the top. 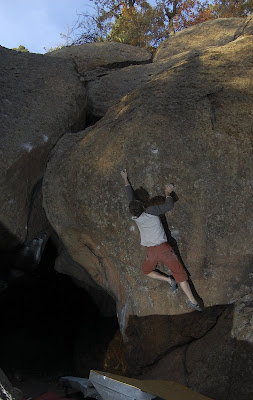 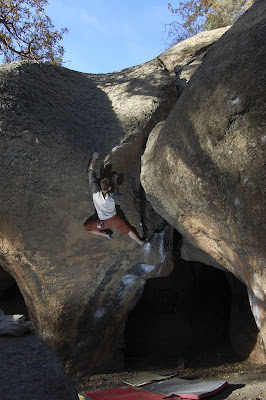 This weekend I went to Cherry with Zack to try Flagstaff hardest project. After finding that we were joined and surrounded by thousands of flies we tried to climb. There is no instrument know to man that could have killed that many flies and left the population of flagstaff still breathing. We had no fire, no chemicals, no sticky tape. All we had was Zack air pistol and that would have just gotten messy. 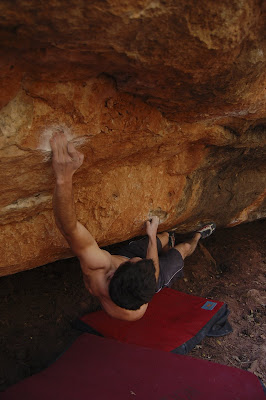 Its surprising how something you've been trying for years can still feel so hard. After trying some new old beta on the Birtch Project I tried to do the start again. At one point I had really good feet that made the first move easy. I have lost these and after a few attempts I broke part of the starting pocket off. We left shortly after.

Sunday Zack and I went to the draw to try Pick Lighting Ultra with little luck. You would think by trying an endurance problem you would gain endurance. This rule however does not apply in the vortex that is flagstaff and I continued to fall in the same spots. 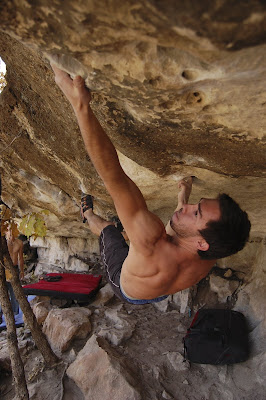 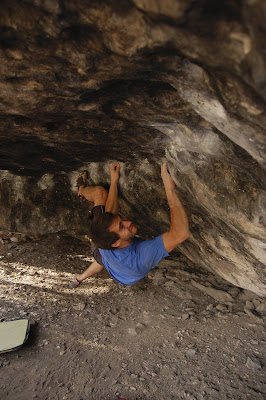 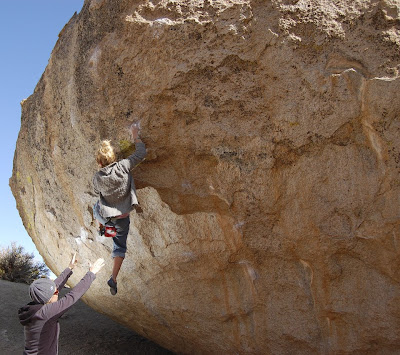 Last weekend Ana and I escaped the evil party vortex that is Flagstaff and headed up to Bishop for a few days. We were supposed to go to Joe's Valley but the weather looked bad but it looked perfect in buttermilk country. We were joined by our friends BK, Lori, Collin, and Helen. Saturday was cold and almost nobody was out. I warmed up while Ana was still sleeping and then headed up to the Swarm. I had seen it years ago but never tried it. On my first go I fell off the forth move going to the right had gaston. I had gotten so close to flashing it and failed. I ended up having to cross for the forth move and also coming back on Sunday to send. 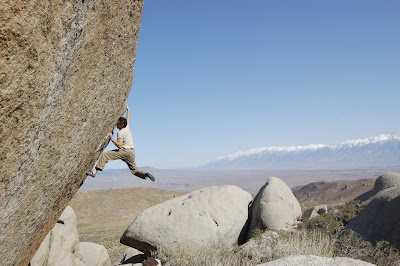 When we got back to the main buttermilk area on Saturday we called BK and Lori only to find that they had gone to the Happys. With a little convinsing they were out freezing at the buttermilks with us in 20 minutes. 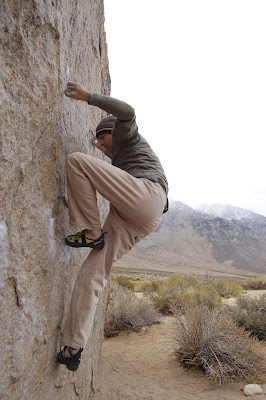 Ana really wanted to work on Soul Slinger and High Plains Drifter so we spent the rest of the day in main area. BK and Lori tried Soul Slinger with us but as soon as the temps droped to 34 degrees we were on our own. After a quick sit in the car to warm up I was out spotting Ana on High Plains while wrapped up in our sleeping bag. We didn't see to many people out climbing and being as it always was we were out climbing until it got dark. Its hard to stop on short trips when the climbing is so good. 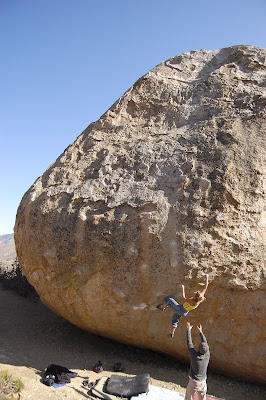 Sunday the temps were a little warmer. After I sent the swarm in the morning we spent the rest of the day in the main part of the buttermilks again. Ana tried the same two problems and I tried Direction a little. I got to the last throw twice but forgot what feet I used for Thunderbird last year. With my skin disappearing I decided to save it for Tuesday and go spot Ana on Soul Slinger. Soul Slinger didn't go so well because Ana didn't sleep to well the night before so we headed over to the Carter boulder with the last little bit of day light left. Once again we were out until the bitter cold end of the day with me spotting wrapped up in the sleeping bag. At one point I was moving a pad and Ana feel over me into the bushes. This would have made most people stop for the day but Ana had to try just a little bit more. 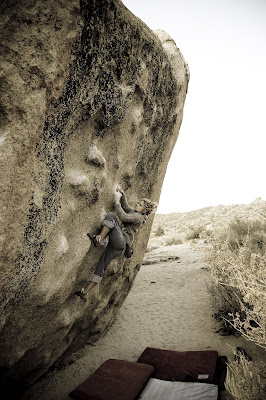 Monday was a nice rest day. Sat around. Went to the hot springs. Ate some good food. A nice change from last years four day trip when we tried to climb all four days in a row. 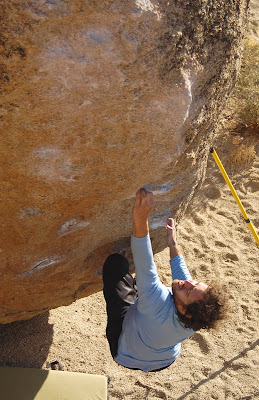 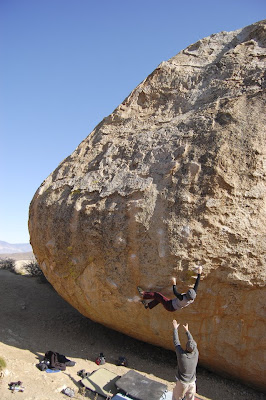 Tuesday didn't go so hot even though it was getting hot. We had just a half day and I wanted to finish of Direction. I started warming up on the Grandma boulder and started working The Mystery. After figureing out all the moves I thought I could do it and ended up falling off the last real big move. This stole my mojo and I was shot for the rest of the day. I tried a lot more but could get my self back to the end. Oh well. Maybe in the Spring... Time to think about Thanks Giving in the Tanks now.
Posted by sd at 9:17 PM 1 comment:

Sam T. on the Bulge 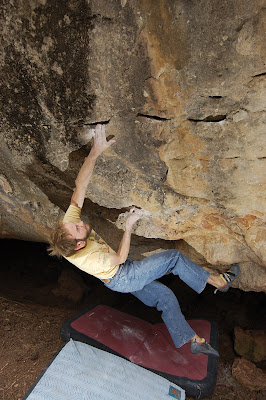 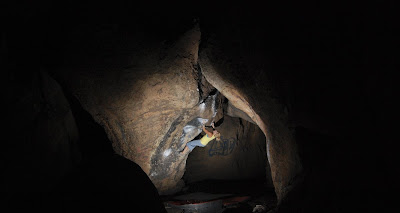 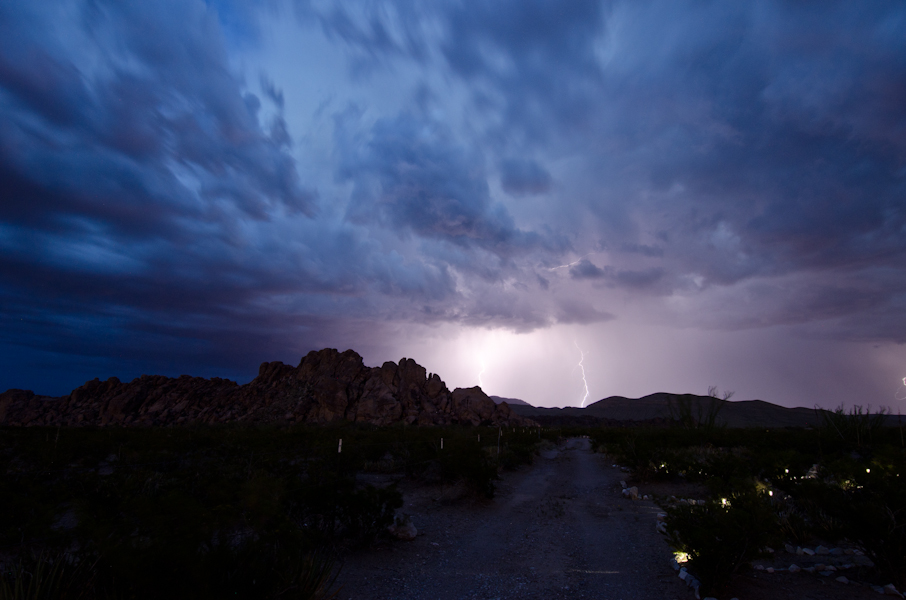 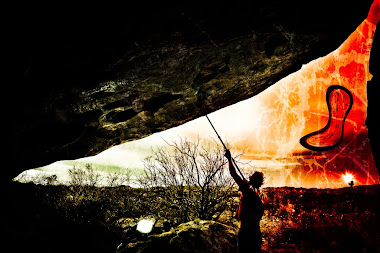 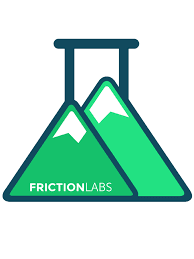 For 15% off your first order use the code Hueco15